The acclaimed album will arrive on Blu-ray Audio in June.

In an early announcement to retailers, Capitol is preparing 'The Beach Boys: Pet Sounds' for Blu-ray Audio on June 10.

This 4CD/Blu-ray Audio collector's edition is presented in a hardbound book, featuring the remastered original album in stereo and mono, plus a new hi res instrumental mix, as well as session outtakes, alternate mixes, previously unreleased live recordings and hi res stereo and mono and 5.1 surround mixes. The Beach Boys' 11th studio album, Pet Sounds has reigned atop countless critic and fan polls, and has maintained its timeless rank as one of popular music's most-cited influences. More than 100 domestic and international publications and journalists have lauded Pet Sounds as one of the greatest albums ever recorded, and it entered the GRAMMY Hall of Fame in 1998. Platinum-certified, Pet Sounds tops MOJO magazine's "Greatest Albums of All Time" at No. 1, while Rolling Stone ranked Pet Sounds at No. 2 in the magazine's list of the "500 Greatest Albums of All Time."

The Blu-ray Audio will feature a 5.1 Surround Sound 96kHz/24-bit soundtrack.

You can find the latest specs for 'The Beach Boys: Pet Sounds' linked from our Blu-ray Release Schedule, where it's indexed under June 10. 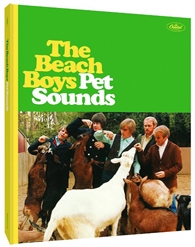