The epic naval war film sails to Blu-ray at the end of April.

In an early announcement to retailers, CJ Entertainment is working on 'The Admiral: Roaring Currents' for Blu-ray on April 28.

The year is 1597. The Joseon Dynasty has been under Japanese attack for six years. As the nation faces the possibility of loss as the Japanese military fearlessly pushes toward the capital, Admiral Yi Sun-Shin (Min-sik Choi) is reappointed as the Chief of Naval Operations and assembles a group of soldiers to defend the nation against attack. Japanese Chief Commander Kurushima (Seung-ryong Ryu), notorious for his cruel personality and clever strategies, responds by destroying Joseon's one last hope, the Turtle Ship. With just twelve battleships and an army of doubtful soldiers, Admiral Yi and his soldiers face 330 Japanese battleships in The Battle of Myeong-Nyang.

You can find the latest specs for 'The Admiral: Roaring Currents' linked from our Blu-ray Release Schedule, where it is indexed under April 28. 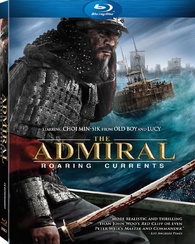