Better Look Out! 'Ticked-Off Trannies with Knives' Are Coming!

Israel Luna's comedy thriller will take a stab at Blu-ray in November.

In an early announcement to retailers, Breaking Glass will be releasing 'Ticked-Off Trannies with Knives' on Blu-ray on November 13.

When the innocent and likable Bubbles Cliquot (Krystal Summers) shows up for her nightly stage performance with a black eye, her transgender friends suspect foul play from her latest boy toy. In order to move on, Bubbles joins her friends on a triple date with charming boys. But it just so happens the blind date is set up by the transphobic creep who gave Bubbles her shiner. After luring them into an abandoned warehouse, the attacker and his two beefy minions unleash all their hatred on the unsuspecting ladies, leaving them banged and bruised, but not broken. After waking up from her coma, Bubbles enlists the aid of her friends to bring her enemies to gory justice.

Specs and supplements haven't been revealed yet, but the suggested list price for the Blu-ray is $12.95.

You can find the latest specs for 'Ticked-Off Trannies with Knives' linked from our Blu-ray Release Schedule, where it is indexed under November 13. 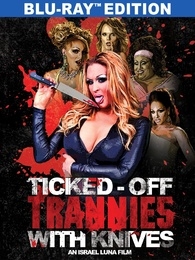