The film will make its Blu-ray debut in a few weeks.

In an early announcement to retailers, Breaking Glass says 'Bob's New Suit' will arrive on Blu-ray on September 22.

Bob Goodlow is a landscape gardener and handyman. His dad, Buster, is a patriotic unemployed aerospace worker with a secret past and congestive heart failure. Bob's sister Stephanie does the books for her girlfriend Marlena's hair salon and holds a secret of her own. Polly, their mother, helps with the struggling finances by selling antique dolls on Ebay and worries for everyone. When Bob proposes to his long time love, Jenny, and his poser cousin, George, proposes a get-rich-quick scheme, a series of events unravels which changes their lives forever. Radical politics, gender identity, the joy of books, rare orchids, a couple of beers and one lonely Italian suit come together in this finely interwoven story about love, family, the legacy of the 1960s and the unexpected.

Specs and supplements have yet to be revealed, but suggested list price for the Blu-ray is $14.95.

You can find the latest specs for 'Bob's New Suit' linked from our Blu-ray Release Schedule, where it is indexed under September 22. 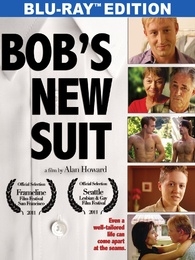