Larry Cohen's 1976 thriller in the works for Blu-ray has now been fully detailed.

As previously reported, Blue Underground will be releasing 'God Told Me To' on Blu-ray in the coming months, and now the date has been set for February 24.

A rooftop sniper guns down 14 pedestrians on the streets of New York City. A mild-mannered dad takes a shotgun and blows away his wife and children. A cop goes on a sudden shooting spree at the St. Patrick's Day Parade. And each of these unlikely killers makes the same dying confession: "God told me to."

Now a repressed Catholic NYPD detective must uncover a netherworld of deranged faith, alien insemination and his own unholy connection to a homicidal messiah with a perverse plan for the soul of mankind. This is the critically acclaimed cult classic written, produced and directed by Larry Cohen that remains one of the most disturbing and though-provoking horror films of our time: God Told Me To.

You can find the latest specs for 'God Told Me To' linked from our Blu-ray Release Schedule, where it's indexed under February 24. 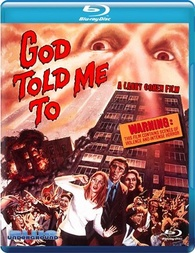