As previously reported, Blue Underground is working on 'The Shape of Things to Come' for Blu-ray, and now the date has been set for September 27.

Planet Earth is a devastated wasteland, and what's left of humanity has colonized the Moon in domed cities. Humanity's continued survival depends on an anti-radiation drug only available on planet Delta Three, which has been taken over by Omus, a brilliant but mad mechanic who places no value on human life. Omus wants to come to the Moon to rule and intends to attack it by ramming robot-controlled spaceships into the domes. Dr. John Caball, his son Jason, Jason's friend, Kim, and a robot named Sparks embark on Caball's space battlecruiser on an unauthorized mission to Delta Three to stop Omus.

You can find the latest specs for 'The Shape of Things to Come' linked from our Blu-ray Release Schedule, where it's indexed under September 27. 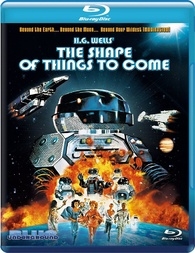