In an early announcement to retailers, Blue Underground is set to release '1990: The Bronx Warriors' on Blu-ray on June 30.

A beautiful young girl ventures forth into the Bronx of New York City even after a nuclear attack has left it a forbidden wasteland of gangs and undesirables.

You can find the latest specs for '1990: The Bronx Warriors' linked from our Blu-ray Release Schedule, where it's indexed under June 30. 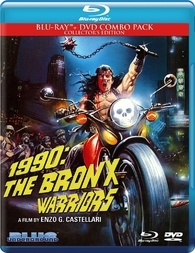