In an early announcement to retailers, Blue Underground says 'Circus of Fear / Five Golden Dragons' will hit Blu-ray on June 28.

CIRCUS OF FEAR: What begins as a daring daylight armored car heist on London's Tower Bridge leads to a sinister circus where a disfigured lion tamer is one of several suspects in a three-ring nightmare of red herrings, grisly 'accidents' and cold-blooded murder.

FIVE GOLDEN DRAGONS: After arriving in Hong Kong, wealthy American playboy Bob Mitchell is the recipient of a strange note found on the body of a dead man. A clue to an illegal gold-trafficking operation, Mitchell is unwittingly thrust into a deadly power struggle between a secretive global crime syndicate and brutal local mobsters.

Specs have yet to be revealed, but supplements will include: Audio Commentary with Director John Moxey; Theatrical Trailers; and Poster & Still Galleries.

You can find the latest specs for 'Circus of Fear / Five Golden Dragons' linked from our Blu-ray Release Schedule, where it is indexed under June 28. 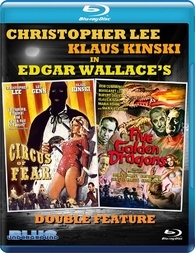