The second season of the BBC series will arrive on Blu-ray in April, and you can pre-order the show here.

In an early announcement to retailers, the BBC is preparing 'The Musketeers: Season Two' for Blu-ray on April 21.

On the streets of 17th century Paris, law and order is more a fledgling idea than reality, and the Musketeers, Athos, Aramis and Porthos, are far more than merely royal bodyguards for King Louis XIII; they are inseparable, loyal unto death and committed to upholding justice. Together, this crack team of highly trained soldiers fight for honor, for valor, for love, and just for the pure thrill of it.

The Blu-ray will feature 1080p video, a DTS-HD MA 2.0 soundtrack, and supplements will include: Behind-the-scenes; and Interviews with cast and crew.

You can find the latest specs for 'The Musketeers: Season Two' linked from our Blu-ray Release Schedule, where it's indexed under April 21. 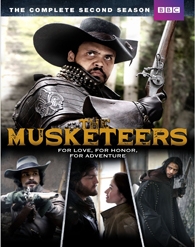 Discs mentioned in this article: (Click for specs and reviews)
The Musketeers: Season Two (Blu-ray)