The BBC's 'Atlantis: Season 2 Part One' Blu-ray Dated for February

Part one of the second season is now available for pre-order.

In an early announcement to retailers, the BBC is preparing 'Atlantis: Season 2 Part One' for Blu-ray on February 10.

The all-too mortal Jason of the Argonauts and his new friends, Hercules and Pythagoras, reunite to romp again in the BBC's hit family fantasy series, set in the mythical streets and palaces of ancient Atlantis. Grab your toga and strap on your shield a s Jason battles famous Greek figures in pursuit of answers to his father's mysterious disappearance. Will Jason finally decode his own destiny, foretold by a cryptic oracle?

You can find the latest specs for 'Atlantis: Season 2 Part One' linked from our Blu-ray Release Schedule, where it's indexed under February 10. 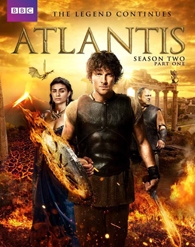 Discs mentioned in this article: (Click for specs and reviews)
Atlantis: Season 2 Part One (Blu-ray)