In an early announcement to retailers, BBC says 'Doctor Who: Last Christmas' will have a Blu-ray release on February 17.

Twelfth Doctor Peter Capaldi and companion Jenna Coleman are joined by Doctor Who fan favorite Nick Frost (Hot Fuzz, Shaun of the Dead) in this extra special Doctor Who special! The Doctor and Clara face their Last Christmas. Trapped on an arctic base and under attack from terrifying creatures, who are you going to call? Santa Claus!

You can find the latest specs for 'Doctor Who: Last Christmas' linked from our Blu-ray Release Schedule, where it's indexed under February 17. 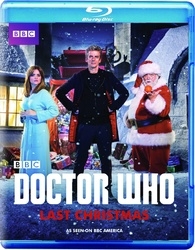