The fourth batch of mysteries of the acclaimed BBC series is available on Blu-ray this week.

As previously reported, the BBC's 'Sherlock: Season Four' is heading to Blu-ray on January 24.

The release will feature 1080p video, lossless 5.1 audio, and supplements include: Behind 221B: A 20-minute making-of featurette for each episode; The Writer's Chat: A look at the process behind writing the series with Steven Moffat and Mark Gatiss; Mark Gatiss's video diaries; and more...

You can find the latest specs for 'Sherlock: Season Four' linked from our Blu-ray Release Schedule, where it's indexed under January 24. 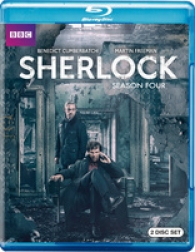