The sci-fi series is rocketing toward Blu-ray in November.

In an early announcement to retailers, BBC Home Entertainment is preparing 'Red Dwarf XI: The Complete Eleventh Series' for Blu-ray on November 8.

The legendary sci-fi comedy returns for an 11th outing, with the original cast and a host of guest stars on board. This series sees two of the Dwarfers' dreams come true: Rimmer accidentally saves a Space Corp Captain and is promoted to Officer, while Cat takes time off from loving himself to fall in love with a female cat with a big secret. Lister wakes up to discover a deranged droid has stolen his body parts and Kryten has a mid-life crisis and changes his body cover from grey to Ferrari red.

The Blu-ray will feature 1080p video, a DTS-HD MA  5.1 soundtrack, and supplements will include:

You can find the latest specs for 'Red Dwarf XI: The Complete Eleventh Series' linked from our Blu-ray Release Schedule, where it's indexed under November 8. 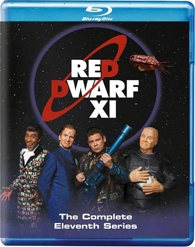