The fourth season of the critically-acclaimed series is headed for Blu-ray in July.

As previously reported, BBC America will be releasing 'Orphan Black: Season Four' on Blu-ray on July 19.

Tatiana Maslany returns to her Emmy-nominated role as multiple clones in the critically-acclaimed pulsating thriller Orphan Black. The explosive third season plunged the clone sisterhood into dangerous territory where they faced the threat of extermination by forces old and new. Banding together, they defeated their most formidable foes - male clones who also happened to be their blood brothers. But while it appears their tactics and allegiances have left them all clear to move forward, the past will reappear to haunt their future.

Season 4 of the drama will see leader-of-the-pack, Sarah, reluctantly return home from her Icelandic hideout to track down an elusive and mysterious ally tied to the clone who started it all - Beth Childs. Sarah will follow Beth's footsteps into a dangerous relationship with a potent new enemy, heading in a horrifying new direction. Under constant pressure to protect the sisterhood and keep everyone safe, Sarah's old habits begin to resurface. As the close-knit sisters are pulled in disparate directions, Sarah finds herself estranged from the loving relationships that changed her for the better.

Returning this season is Jordan Gavaris as Sarah's battle-worn foster brother Felix; Maria Doyle Kennedy as Sarah and Felix's foster mother Mrs. S; Kristian Bruun as Donnie, Alison's partner-in-crime and husband; Kevin Hanchard as Art, Beth's detective partner who's torn between his job and his loyalty to the clones; Skyler Wexler as Sarah's long-suffering daughter Kira; Ari Millen as a mysterious new Castor clone, the likes of which we've never seen before; and Josh Vokey as Scott, Cosima's lab partner. Also returning this season is James Frain as Ferdinand, an intimidating "cleaner" for shadowy organization, Topside; Allison Steadman as Kendall Malone, "the original"; and Rosemary Dunsmore as Susan Duncan, Rachel's adoptive mother and one of the leading scientists of Project Leda. Joining the Orphan Black cast this season is Joel Thomas Hynes as Dizzy, an edgy, self-reliant hacker who doesn't conform to group mentality.

The Blu-ray will feature 1080p video, a DTS-HD MA 5.1 soundtrack, and supplements will include: Exclusive interviews; Behind-the-scenes content; and an Extended scene from episode eight.

You can find the latest specs for 'Orphan Black: Season Four' linked from our Blu-ray Release Schedule, where it is indexed under July 19. 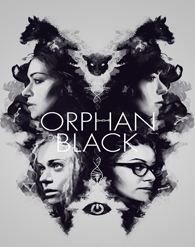