'Miss Marple: Volume One' Will Crack the Case on Blu-ray in October

Four more classic Agatha Christie mysteries will be getting the high-definition treatment in October. You can pre-order your copy here.

In an early announcement to retailers, BBC is preparing 'Miss Marple: Volume One' on Blu-ray on October 28.

Gather your wits and join best-selling author Agatha Christie's popular sleuth Miss Jane Marple in four delightfully baffling mysteries starring Joan Hickson; the actress Christie herself wanted for the title role. Regarded by many fans as the definitive Miss Marple, Joan Hickson was one of the oldest actresses to take a lead role in a major television series when she was cast as Agatha Christie's soft-spoken, sharp-eared sleuth at the age of 78 in 1984. She retired eight years later, having completed 12 mysteries in the Miss Marple series.

When the hated Colonel Protheroe is found murdered in the sleepy village of St. Mary Mead, Miss Marple wonders why so many people want to confess in "The Murder at the Vicarage." A strange young blonde is found strangled at Gossington Hall, the home of Colonel and Dolly Bantry, in "The Body in the Library," but luckily Miss Marple is their neighbor. In "The Moving Finger," a nasty case of poison-pen letters bring Miss Marple to East Anglia. And finally, in "A Murder is Announced," everyone in Chipping Cleghorn is intrigued by the advertisement predicting a murder at Little Paddocks. But when the lights go out at the appointed hour, no one thinks it's a joke anymore. All four stories were shot entirely on location and feature appearances by A-List British actors including BAFTA Winner Cheryl Campbell, Samantha Bond and Ralph Michael.

Specs haven't been revealed yet, but supplements include: A Very British Murder, Part 1: The first episode of a three-part series documenting the British national obsession with murder mysteries.

You can find the latest specs for 'Miss Marple: Volume One' linked from our Blu-ray Release Schedule, where it is indexed under October 28. 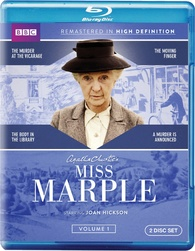