The first eight episodes of the supernatural series is bound for Blu-ray in December. You can pre-order it now.

In an early announcement to retailers, BBC is working on 'Intruders: Season 1' for Blu-ray on December 23.

John Simm (Doctor Who, Life on Mars, State of Play) and Academy Award-winner Mira Sorvino (Mighty Aphrodite, Norma Jean & Marilyn) star in this chilling paranormal tale about an evil secret society devoted to chasing immortality by taking refuge in the bodies of the living. Add to this a sinister agent bent on executing the unlucky to cover his crimes and a ten-year-old girl who picks the most dangerous moment to run away from home and you get Intruders, an eerie supernatural suspense series from the creator of The X-Files.

You can find the latest specs for 'Intruders: Season 1' linked from our Blu-ray Release Schedule, where it's indexed under December 23. 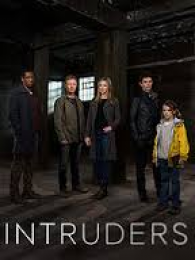