'Doctor Who: The Complete Matt Smith Years' Announced for Blu-ray

Rev up your TARDIS, more Doctor Who his headed to Blu-ray in November. Pre-orders are now available.

In an early announcement to retailers, BBC says 'Doctor Who: The Complete Matt Smith Years' will arrive on Blu-ray on November 4.

This special release comes in a collectible lay-flat book and features the Complete Matt Smith episodes: Series Five through Series Seven, all of Matt Smith's Christmas Specials including The Time of the Doctor, his last Christmas Special, plus the 50th Anniversary Special The Day of the Doctor in 3D and 2D, and An Adventure in Space and Time, all at full 1080p resolution. New bonus features include the 2013 Doctor Who Proms Concert, Matt Smith's two Sarah Jane Adventures episodes, The Five(ish) Doctors, and more.

You can find the latest specs for 'Doctor Who: The Complete Matt Smith Years' linked from our Blu-ray Release Schedule, where it is indexed under November 4. 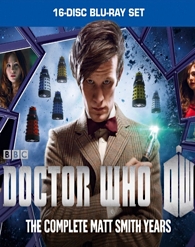