'Doctor Who: The Complete Eighth Series' Bound for Blu-ray in December

The adventures of the 12th Doctor makes their way to Blu-ray in December. Pre-orders are now available!

In an early announcement to retailers, BBC will be bringing 'Doctor Who: The Complete Eighth Series' on Blu-ray on December 9.

When the Doctor first regenerates and arrives in Victorian London, he finds a dinosaur rampant in the Thames and a spate of deadly spontaneous combustions. From there, he journeys inside a Dalek, into the heart of Sherwood Forest, to the very end of the universe, into the most dangerous bank in the cosmos, and beyond. But who is the new Doctor? And will Clara's friendship survive as they embark on a terrifying mission into the heart of a new alien conspiracy? The Doctor has changed. It's time you knew him.

Supplements have yet to be revealed, but the 4-disc set will include all 12 episodes with 1080p video and lossless 5.1 audio.

You can find the latest specs for 'Doctor Who: The Complete Eighth Series' linked from our Blu-ray Release Schedule, where it is indexed under November 4. 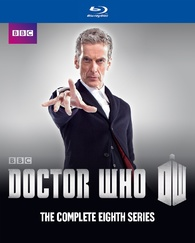