The sci-fi show based on Douglas Adams' book series is heading to Blu-ray in December.

In an early announcement to retailers, The BBC is preparing 'Dirk Gently's Holistic Detective Agency' for Blu-ray on December 13.

Corpses – cops – trap – cult – assassins – Pararibulitis – vampires – lottery ticket – kitten – corgi – EVERYTHING IS CONNECTED! Welcome to the world of Dirk Gently’s Holistic Detective Agency; a trippy mystery that thrusts a reluctant sidekick into the bizarre world of an unconventional detective who believes in the interconnectedness of all things.

You can find the latest specs for 'Dirk Gently's Holistic Detective Agency' linked from our Blu-ray Release Schedule, where it's indexed under December 13. 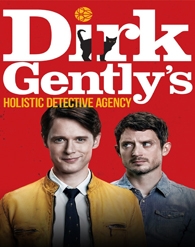