The third season of the hit BBC series will arrive on Blu-ray in August, and you can pre-order the show now.

In an early announcement to retailers, BBC is preparing 'Orphan Black: Season Three' for Blu-ray on August 4.

Golden Globe nominee Tatiana Maslany (Picture Day) electrifies once again in season two of the hit series Orphan Black. Sarah (Maslany) is in a desperate race to find her missing daughter, but her scorched earth tactics spark a war with Rachel (Maslany), dividing and imperiling all the clones (Maslany, Maslany, Maslany). As Sarah discovers more about her past, mysterious newcomers appear, but can they be trusted?

You can find the latest specs for 'Orphan Black: Season Three' linked from our Blu-ray Release Schedule, where it's indexed under August 4. 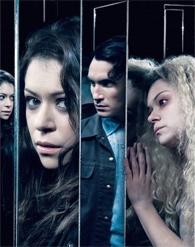