The documentary miniseries narrated by Sir David Attenborough is planned for Blu-ray at the end of the month.

In an early announcement to retailers, BBC will be releasing 'Life Story' on Blu-ray on March 29.

'Life Story' captures a number of filming feats as elephants, spiders, chimpanzees, polar bears, humming birds, and more are observed on a journey that is documented in six crucial stages: taking their first steps in the world, growing up, finding a home, gaining power, winning a mate, and succeeding as a parent. The series, distributed by BBC Home Entertainment, was shot in ultra-high definition 4k (ultra-HD), using stabilized camera technology – normally associated with drama filming – which allowed the production crews the freedom to move alongside the animals.

Over a period of four years, there were 78 separate shoots which included a five-week expedition into the far reaches of the Gobi desert, eight days spent crossing dangerous seas to reach the sub-Antarctic, and seven weeks trekking through the heart of the Congolese jungle.

The episodes in this set include:

•First Steps: Vulnerable and naïve, but determined, some young animals face their biggest challenges in the first few days of life. Barnacle goslings must take a leap of faith, falling 120 meters from a cliff ledge, to get their first meal. A tiny young long-eared jerboa faces the daunting, nighttime world of the Gobi desert completely alone – in the first images of their kind. And at just two months old a humpback whale calf, preparing to embark on a migration halfway round the world, is caught up in a "heat run" of aggressive males, each around 40 tons, fighting for a female. In infancy, every challenge is a new one. But how a creature fares at the very beginning of its life is the foundation upon which their future success depends.

•Growing Up: For an Arctic fox, the end of childhood is abrupt; his own mother chases him from the den and onto the Arctic ice. At this crucial stage in life, every small success is a triumph. In the high-octane world of a booted racket-tail hummingbird, even to survive the day is victory. For Bengal tigers, growing independence brings with it extreme danger. They need the help of their parents to grow up in a very dangerous society. Time is already running out for two hungry cheetah sisters, recently separated from their mother – scraps are not enough. This episode follows them as they embark on their first big game hunt.

•Home: Good homes are rare and competition can be intense. On a paradise island, an empty shell washes ashore and a young hermit crab joins others in a property chain. In unique behavior the crabs actually form an orderly queue so that each can quickly move into the next shell up in size. In a weaver ant colony, even the larvae must contribute to home building, while remoras, also known as "shark-suckers" have a long wait for the right mobile home to appear – a bull shark. Finding a home is one thing, but defending it is quite another. Pikas (a diminutive relative of the rabbit) must guard their larders from thieving neighbors while a pack of hunting dogs rely on disciplined teamwork to protect their home turf when hyenas try to muscle in.

•Power: A honeypot ant queen allies with other queens to build an army, but when the job is done all but one royal will be eliminated by the army they have created. For a juvenile bald eagle, power – or the lack of it – could mean starvation. While a young meerkat's spectacular altercation with a cobra will influence his standing in the clan, a male chimpanzee's existence is one long battle for power; one false move can undo a lifetime of struggle. But power is the ultimate prize: animals will use any means to rise through the ranks and win the game of life.

•Courtship: The male of the dazzling, aptly-named peacock jumping spider must pick his way between the bodies of failed suitors for his one chance to win a female's affections. For the green turtle, it's the female who risks her life: as males pile in to mate with her, she struggles beneath their combined weight, desperate for a breath of air at the surface. But few will go as far as one unlikely architect. Diminutive and drab, a male pufferfish compensates for his lack of charisma by building the most complicated and perfect structure made by any animal – a spectacular submarine "crop circle" in the sand – created to get himself noticed by a female.

•Parenthood: Some parents risk their own lives for their offspring. After laying her eggs in the best possible location, a mother green turtle races time and tide to survive, while a mother bison must fend off an entire pack of wolves in pursuit of her precious calf. There's no substitute for a mother's love; a hanuman langur gratefully accepts the services of an apparently adoring babysitter, but must intervene when playtime gets too rough for her delicate infant. A devoted fork-tailed drongo mother is duped into caring for someone else's offspring. Not so for a bonobo mother whose commitment to her own son lasts a lifetime, in the most intimate wild footage captured of this species in 10 years.

You can find the latest specs for 'Life Story' linked from our Blu-ray Release Schedule, where it is indexed under March 29. 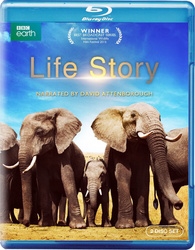