The next wave of mysteries featuring the elderly super-sleuth arrives on Blu-ray in March.

In an early announcement to retailers, BBC will be releasing 'Miss Marple: Volume Two' on Blu-ray on March 31.

Gather your wits and join best-selling author Agatha Christie's popular sleuth Miss Jane Marple in four delightfully baffling mysteries starring Joan Hickson; the actress Christie herself wanted for the title role. Regarded by many fans as the definitive Miss Marple, Joan Hickson was one of the oldest actresses to take a lead role in a major television series when she was cast as Agatha Christie's soft-spoken, sharp-eared sleuth at the age of 78 in 1984. She retired eight years later, having completed 12 mysteries in the Miss Marple series.

Agatha Christie's sharp-eyed sleuth returns for four more classic English murder mysteries in Volume Two. When a country-house murder happens right under Miss Marple's nose, she gradually deduces how "They Do It with Mirrors." A nursery rhyme comes horribly true in "A Pocketful of Rye." Whatever happened to the body of a woman murdered on the "4:50 from Paddington"? And in "The Mirror Crack'd from Side to Side," who was the intended victim of the poisoned cocktail that killed Heather Badcock? Hickson stays one step ahead of you in these stylish and lushly produced mystery dramas, also starring Jean Simmons, Peter Davidson and Claire Bloom.

You can find the latest specs for 'Miss Marple: Volume Two' linked from our Blu-ray Release Schedule, where it is indexed under March 31. 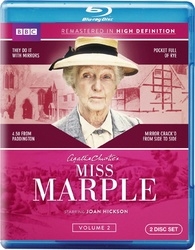