The documentary narrated by Kate Winslet will hit the 4K format in January.

Narrated by Kate Winslet, Oceans: Our Blue Planet takes us on a global odyssey to discover the largest and least explored habitat on earth. New ocean technology has allowed us to delve further into the unknown than ever before. From the coastal shallows to deeper, more mysterious worlds, we reveal the spectacular stories of life beneath the waves.

You can find the latest specs for Oceans: Our Blue Planet - 4K Ultra HD Blu-ray linked from our 4K Blu-ray Release Schedule, where it is indexed under January 22. 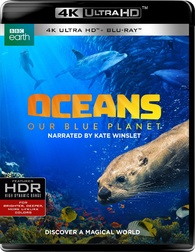