'Sharknado 2: The Second One' Announced for Blu-ray

Syfy's infamous airborne sharks return to Blu-ray this October. You can preorder your copy right here!

In an early announcement to retailers, Cinedigm and Asylum will be releasing 'Sharknado 2: The Second One' on Blu-ray on October 7.

Directed by Anthony C. Ferrante (Sharknado), the terrifying and hilarious sequel to Syfy's smash hit film once again matches heroes against sharks who are swept up into deadly storms to form lethal "Sharknadoes." This time, terror hits the Big Apple and no one is safe!

Specs have yet to be revealed, but supplements will include: The Making of Sharknado 2; Deleted Scenes (Shark Chum: From the Cutting Room Floor); Gag Reel; Cameos Spotlight; Directors Commentary with Ian Ziering & Tara Reid; and two Blu-ray exclusives -- VFX Special Feature - The evolution of the SharknadoVFX; and Filmmakers' Commentary.

You can find the latest specs for 'Sharknado 2: The Second One' linked from our Blu-ray Release Schedule, where it's indexed under October 7. 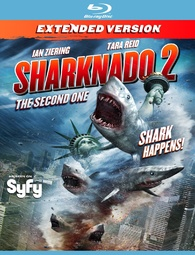 Reel in the Blu-ray!