The third film in the zany franchise gets an extended cut Blu-ray in October.

In an early announcement to retailers, the Asylum is preparing 'Sharknado 3' for Blu-ray on October 6.

When a mass of Sharknadoes threatens America’s East Coast, chainsaw-wielding hero Fin must again risk his life to save his children on spring break. But as he fights his way south, the sharknadoes merge and grow bigger than ever before.

Specs have yet to be revealed, but supplements include: LIGHTS, CAMERA, SHARKS: The making of Sharknado 3; FEEDING FRENZY: An exclusive look at the Sharknado Documentary; SHARK TAILS: Alternate Endings; The Asylum VFX: Before & After; Cast and Crew Commentary; GROWING PAINS: The Evolution of Sharknado VFX; Gag Reel; BITE MARKS: Famous Faces in Sharknado 3!; ARCHIE VS. SHARKNADO; A STORMY ROMANCE: A Sharknado Love Story; MAKING OF THE SOUNDTRACK; and SHARK CHUM: Extended Scenes.

You can find the latest specs for 'Sharknado 3' linked from our Blu-ray Release Schedule, where it is indexed under October 6. 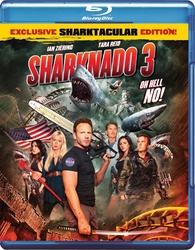