The new app is heading to Apple devices in December.

Apple has announced the upcoming launch of its new TV app for Apple TV, iPhone, and iPad. In addition, the company has also revealed a new Siri feature for Apple TV that lets users access live news and sporting events across their apps.

"Using apps on Apple TV, iPhone and iPad has become the primary way for so many of us to watch television," said Eddy Cue, Apple's senior vice president of Internet Software and Services. "The TV app shows you what to watch next and easily discover TV shows and movies from many apps in a single place."

With the new TV app for Apple TV, iPhone, and iPad, customers will be able to find and play TV shows and movies from multiple apps on their devices -- all through one unified experience. 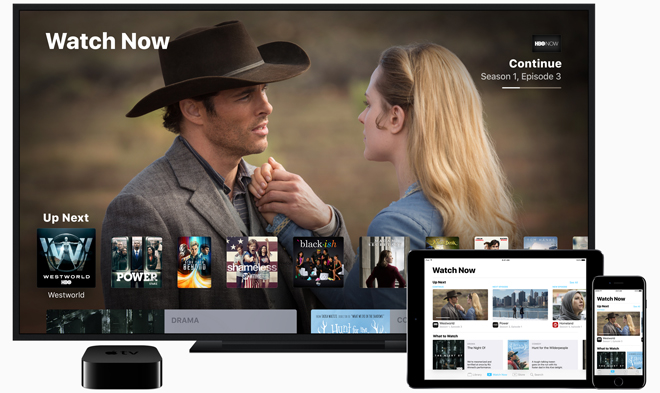 Here's a rundown of key features per the press release:

- Watch Now: Watch Now is where viewers will see their collection of available shows and movies from iTunes and apps. From Watch Now, viewers can then go to Up Next or Recommended to choose what to watch.

- Up Next: Users can enjoy the shows and movies they are currently watching, including recent iTunes rentals and purchases — all presented in the order they are most likely to watch first. For example, when viewers finish an episode, the next one will automatically appear at the start of the Up Next queue, as will any new episodes as they become available. At any time, users can simply ask Siri to continue watching a show and immediately pick up where they left off.

- Recommended: Viewers can explore a great selection of curated and trending shows and movies, including collections handpicked by Apple’s curators, and dedicated categories and genres such as kids, sci-fi and comedy.

- Library: Viewers can access their entire collection of iTunes movies and TV shows that they have rented or purchased on iTunes.

- Store: If users are looking for something new, they can check out the Store to discover great new content across video services that they have not yet downloaded or are not yet subscribed to, along with the latest releases on iTunes.

Beyond the new TV app, Apple also announced a new Siri feature for the Apple TV. As part of the upgrade, Siri is now aware of live sporting events and news across apps. This allows users to simply say things like "Watch CBS News," "Watch the Stanford game," or "Which games are on right now?" to access specific content and info. Likewise, Siri can also offer various details and live scores on sports games.

Finally, Apple is also adding a single sign-on feature for pay-TV apps on the Apple TV, iPhone, and iPad. With single sign-on, subscribers to DIRECTV, DISH Network, and more will be able to sign in once on their Apple device to enjoy immediate access to numerous apps that are part of their pay-TV subscription.

The new TV app and single sign-on feature for Apple TV (4th generation), iPhone, and iPad will be available as part of a free software update in December. Meanwhile, the Siri live tune-in feature is available starting today.