The Amazon original movie will start streaming later this month.

Amazon has announced a streaming premiere date for its original movie, 'Love & Friendship.' The film will be available through Amazon Prime Video at no additional cost to Prime members on October 20.

"Love & Friendship brings to life Jane Austen's novella in a captivating comedic style thanks to Whit Stillman's unique voice and filmmaking coupled with amazing acting by  and Chloë Sevigny," said , Worldwide Head of Motion Pictures,  Studios. "We're thrilled that after a successful theatrical run, the Amazon Original Movie will be available this month for our Prime members to stream and enjoy."

Beautiful, young widow Lady Susan Vernon (Kate Beckinsale) visits the estate of her in-laws to wait out the colorful rumors about her dalliances circulating through polite society. Whilst ensconced there, she decides to secure a husband for herself and a future for her eligible but reluctant daughter, Frederica (Morfydd Clark). In doing so she attracts the simultaneous attentions of the young, handsome Reginald DeCourcy (Xavier Samuel), the rich and silly Sir James Martin (Tom Bennett) and the divinely handsome, but married, Lord Manwaring, complicating matters severely. 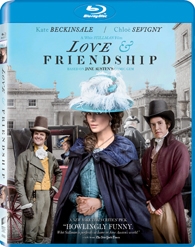