HDD Deal of the Week: Ken Burns' 'The Roosevelts: An Intimate History' is $49.49 at Amazon

Own the acclaimed documentary miniseries for over 60 percent off this week at Amazon.

Amazon's deal this week is 'The Roosevelts: An Intimate History' on Blu-ray for $49.49 (62% off suggested list price).

This offer for 'The Roosevelts: An Intimate History' is available from now through July 26. 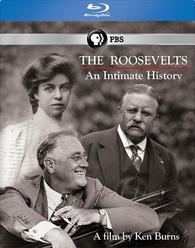