Own the set of three Neill Blomkamp films for nearly 65 percent off today only at Amazon.

Amazon's deal today is 'Blomkamp³' on Blu-ray in digibook-style packaging for just $19.99 (64% off suggested list price).

The world of Neill Blomkamp is unlike any other. Distinct of story and vision, and for the first time together in this limited edition Blu-ray set, District 9, Elysium and Chappie define Blomkamp as a true auteur. Relish in these action-packed hits with a new collection of extras, including limited-release special features on District 9 and Elysium, and an alternate ending and exploration of visual effects, weaponry and artificial intelligence on Chappie.

This special offer for 'Blomkamp³' is available for today only. 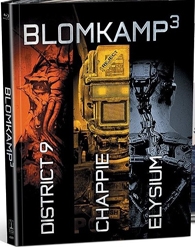