The crime drama is heading to Blu-ray in February.

As previously reported, Acorn Media is preparing 'The Level: Series 1' for Blu-ray on February 21.

Detective Nancy Devlin, a good cop with a dark secret, finds her professional and personal life colliding when she becomes too deeply involved in a murder investigation in her hometown of Brighton. Karla Crome, Noel Clark, Laura Haddock and Amanda Burton star in this gripping crime drama.

- On Set & Behind the Scenes
- From Page to Screen
- Where Truth Meets Fiction
- How They Do Like to Be Beside the Seaside
- What's Location Catering Like?
- Why are Murder and Cop Dramas So Popular?

You can find the latest specs for 'The Level: Series 1' linked from our Blu-ray Release Schedule, where it's indexed under February 21. 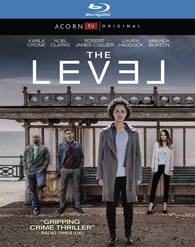 Discs mentioned in this article: (Click for specs and reviews)
The Level: Series 1 (Blu-ray)