Four murder mysteries will unravel on Blu-ray in July. You can pre-order the show now.

In an early announcement to retailers, Acorn Media is preparing 'The Brokenwood Mysteries: Series 1' for Blu-ray on July 7.

Detective Senior Sergeant Mike Shepherd (Neill Rea, Go Girls) arrives on assignment in Brokenwood, a small town where memories-and animosities- run deep. He's an experienced cop with a 1971 "classic" car, a collection of country music cassettes, and an indeterminate number of ex-wives. The new woman in his life is his assistant, Detective Kristin Sims (Fern Sutherland, The Almighty Johnsons), a by-the-book investigator nearly 20 years younger than her boss's car, who quickly has to get used to his lone-wolf ways. As Shepherd adapts to the slower pace of life away from the city, he soon discovers that Brokenwood is a place of secrets and suspicions. Everyone and everything is connected, and the serenity of the countryside can easily be shattered by violence and death. Filmed amid the beautiful landscape of New Zealand's North Island, these four feature-length mysteries show that murder can haunt even the most idyllic locations.

You can find the latest specs for 'The Brokenwood Mysteries: Series 1' linked from our Blu-ray Release Schedule, where it's indexed under July 7. 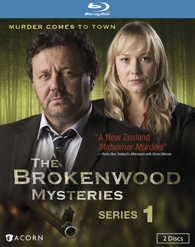 Discs mentioned in this article: (Click for specs and reviews)
The Brokenwood Mysteries: Series 1 (Blu-ray)