The gripping period drama is planned for Blu-ray next month.

In an early announcement to retailers, Acorn Media has revealed 'New Worlds' will arrive on Blu-ray on June 2 th.

Set during the tumultuous time of North American colonization, this gripping drama follows the lives of four young people—Abe Goffe (Jamie Dornan), Beth Fanshawe (Freya Mavor, Skins), Ned Hawkins (Joe Dempsie, Game of Thrones), and Hope Russell (Alice Englert, Beautiful Creatures)—as they fight for a better future in the wilderness of the New World and back home in England. Originally premiering on Acorn TV in February and “on the scale of Game of Thrones or The Pacific”, this four-part miniseries sets political intrigue, action-packed adventure, and passionate romance against the historical backdrop of the Restoration, all brought to life in stunning location shoots and rich cinematography. “Gripping, passionate…New Worlds has a winning combo…Beautifully shot.” (Elle).

The Blu-ray will feature 1080p video, a lossless soundtrack, and supplements include: Behind-the-scenes featurettes (16 min.), deleted scene (2 min.) and a photo gallery.

You can find the latest specs for 'New Worlds' linked from our Blu-ray Release Schedule, where it is indexed under June 2. 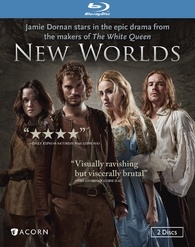