The BBC mysteries will be available on Blu-ray in January.

In an early announcement to retailers, Acorn Media says 'Agatha Christie's Partners in Crime' will arrive on Blu-ray on January 5.

In these sparkling new BBC adaptations of two Christie novels, David Walliams (Little Britain) and Jessica Raines (Call the Midwife) portray the endearing pair whose quiet lives are upended by a chance encounter on a Paris train. In The Secret Adversary, they search for a missing woman and a recording that could unmask a Soviet hit man. In N or M? they must discover which person at a seaside guesthouse has stolen a nuclear bomb. Each thrilling adventure abounds with humor, international espionage, visual flair, and chic period fashion.

Specs haven't been revealed yet, but supplements include: Two behind-the-scenes featurettes about the making of the show and the costume design (89 min.); Interview with Clarke Peters (25 min.); and Photo Gallery.

You can find the latest specs for 'Agatha Christie's Partners in Crime' linked from our Blu-ray Release Schedule, where it is indexed under January 5. 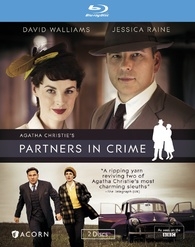