The latest batch of episodes from the British crime series currently up for pre-order at Amazon has now been fully detailed.

In an early announcement to retailers, Acorn Media is preparing 'Foyle's War: Set 8' for Blu-ray on May 5.

The eighth season's mysteries include "High Castle" (a translator for the Nuremberg trials is killed, leading Foyle into the world of international oil politics and corrupt Nazi businessmen); "Trespass" (the son of a prominent Jewish man is assaulted as a right-wing manifesto inflames anti-Semitic tensions in London); and "Elise" (after an assassination attempt on Hilda Pierce, Foyle examines her Special Operations Executive activities during the war and rumors of a traitor).

The Blu-ray will feature 1080p video, a DTS-HD MA 5.1 soundtrack, and supplements will include: A Day in the Life of Foyle's War, Back in Time with Foyle's War, The Truth behind the Fiction, John Mahoney Interview, and Photo Gallery.

You can find the latest specs for 'Foyle's War: Set 8' linked from our Blu-ray Release Schedule, where it's indexed under May 5. 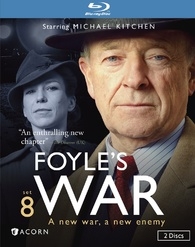