A new batch of mysteries will be solved on Blu-ray in May.

In an early announcement to retailers, Acorn Media is preparing 'The Brokenwood Mysteries: Series 2' for Blu-ray on May 3.

Detective Inspector Mike Shepherd arrives on assignment in Brokenwood, a small town where memories-and animosities--run deep. He's an experienced cop with a 1971 classic car, a collection of country music cassettes, and an indeterminate number of ex-wives. The new woman in his life is his assistant, Detective Constable Kristin Sims (Fern Sutherland, The Almighty Johnsons), a by-the-book investigator 15 years younger than her boss's car. Series two includes four mysteries: 'Leather and Lace,' 'To Die or Not to Die,' 'Catch of the Day,' and 'Blood Pink.'

You can find the latest specs for 'The Brokenwood Mysteries: Series 2' linked from our Blu-ray Release Schedule, where it's indexed under May 3. 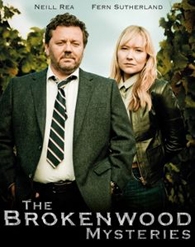 Discs mentioned in this article: (Click for specs and reviews)
The Brokenwood Mysteries: Series 2 (Blu-ray)