All six episodes featuring the Australian antihero will be coming to Blu-ray in a two-disc set.

In an early announcement to retailers, Acorn Media will be releasing 'Jack Irish: Season 1' on Blu-ray on July 26.

Guy Pearce delivers a magnificent performance as the wounded but charismatic Jack Irish. When Jack is contracted to find a man with a criminal past who is then killed in front of him, Jack suspects a set-up. The case spirals into a larger international conspiracy involving Muslim extremists and born-again Christians.

Meanwhile, Jack’s on-again, off-again girlfriend, journalist Linda Hillier (Marta Dusseldorp), leaves Melbourne to further her career as a foreign correspondent in Manila. Though the job is not exactly what she had planned, Linda quickly realizes she may be on to a big story. As their cases eventually intertwine, Jack and Linda’s reunion is tested by the arrival of Sarah Longmore (Claudia Karvan, The Secret Life of Us), a metal sculptor with connections.

The 2-disc set include six episodes with lossless 5.1 audio and supplements include behind the scenes featurettes and a photo gallery.

You can find the latest specs for 'Jack Irish: Season 1' linked from our Blu-ray Release Schedule, where it is indexed under July 26. 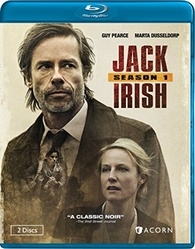