Agatha Christie's 'And Then There Were None' Bound for Blu-ray

The acclaimed murder mystery miniseries heads to Blu-ray in April.

In an early announcement to retailers, Acorn Media says 'And Then There Were None' will arrive on Blu-ray on April 19.

As the world teeters on the brink of World War II, 10 strangers are invited to isolated Soldier Island. Among them are young secretary Vera Claythorne (Maeve Dermody), soldier Philip Lombard (Aidan Turner), General John MacArthur (Sam Neill), spinster Emily Brent (Miranda Richardson), and Judge Lawrence Wargrave (Charles Dance). With seemingly nothing in common, the guests wonder who their mysterious host may be. But the ominous reason for their visit soon becomes clear… and by the end of the night, the first of them is dead.

The Blu-ray will feature 1080p video, lossless 5.1 audio, and supplements include: Behind-the-scenes featurette (43 min.), featurette about Agatha Christie (20 min.), an interview with writer Sarah Phelps (15 min.), and a photo gallery.

You can find the latest specs for 'And Then There Were None' linked from our Blu-ray Release Schedule, where it is indexed under April 19. 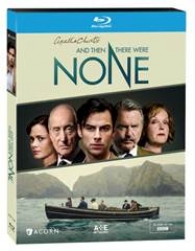