For decades films fans have been debating one very important question: Is Die Hard a Christmas movie? Perhaps second only to "Did Han shoot first?", the seemingly simple query has led to a rather heated split between moviegoers.

And according to a recent poll conducted by the Morning Consult/Hollywood Reporter, there might finally be a consensus on the answer. The only problem? The majority is wrong. Hans-Gruber-dead wrong!

Per the results of the survey, 62% of the participants believe that Die Hard is not a Christmas movie. Meanwhile, only a quarter of the respondents think that the flick should be considered a Christmas movie. When the results are further broken down by demographics, it's revealed that people between the ages of 30-44 were the most supportive of the Christmas association -- with 37% of that group answering in the affirmative. Check out a full breakdown of the results per Morning Consult below: 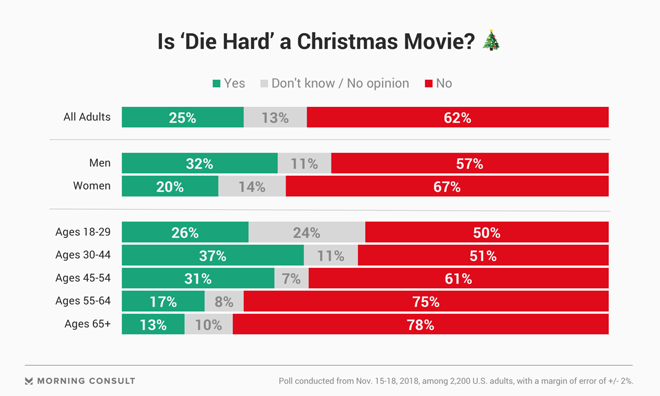 The poll was conducted between November 15 and November 18 among 2,200 U.S. adults. And while the site states that there's a margin of error of 2 percentage points… as far as I'm concerned it's way bigger than that!

Yes, as you can probably guess by now, I'm one of the apparently few who do indeed believe that Die Hard is a Christmas flick. Sure, Bruce Willis himself might disagree, but I've got a few "well-reasoned" points to back up my claim:

1. It takes place on Christmas Eve

This one is pretty self-explanatory. Sure, a story occurring during the holiday doesn't automatically make it a Christmas movie, but it definitely gets the snowball rolling.

2. The film is set during an actual Christmas party

Expanding upon the above, Die Hard doesn't just take place during Christmas Eve -- it's actually set at a Christmas party complete with festive decorations and yuletide cheer… at least, until the terrorists show up.

Yeah, his form of punishment might be a little more extreme than a traditional lump of coal, but John McClane makes sure that all the naughty terrorists are punished and the nice hostages are saved. Hell, he even manages to scribble a festive warning across one of the dead criminals he takes out, writing "Now I have a machine gun. Ho-ho-ho" -- resulting in the greatest Christmas sweater ever made.

4. It works in a famous Christmas poem

During the police siege on Nakatomi Plaza one of the flick's villains makes a snarky reference to a very famous Christmas poem when he says, "Twas the night before Christmas, and all through the house, not a creature was stirring -- except for the four assholes coming in the rear in standard two-by-two cover formation." You see, even the terrorists are getting in the spirit of the holiday!

Many who argue against Die Hard being a Christmas flick cite the film's violence and lack of holiday themes -- but McLane's desire to reunite with his estranged wife and kids could not be more in line with classic Christmas storytelling… right down to a final shot where the couple embraces as "Let it Snow" plays on in the background.

6. Come on, it just gives us a great excuse to watch it... again

At the end of the day whether Die Hard is a certifiable Christmas flick or not doesn't really matter. It checks off enough of the requirements and evokes the general atmosphere of the holiday season, giving film fans a perfect excuse to snuggle up by the fire with their loved ones while John McClane kicks some major ass across their TV screen. 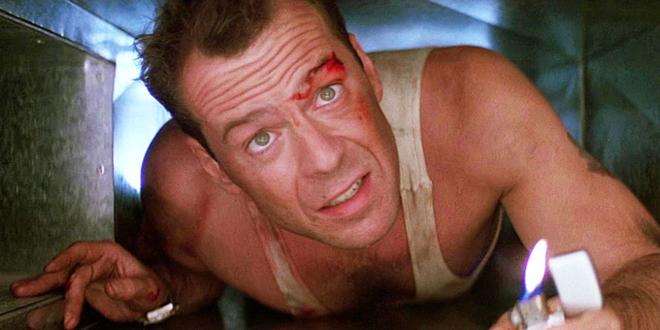