Sales of discs are continuing to drop but the home entertainment industry itself is growing.

As reported by The Digital Bits, recent sales data presented by the MPAA does not paint a particularly promising future for physical media. With that said, the continued popularity of streaming and cable services have led to an overall increase in home entertainment spending.

According to the market data from the Digital Entertainment Group and IHS Markit, global physical media sales have declined by a staggering 48% over the last five years, dropping from $25.2 billion in 2014 to only $13.1 billion last year. And sadly, the launch of 4K and potential future arrival of 8K media don't seem to be pushing toward any kind of substantial uptick. 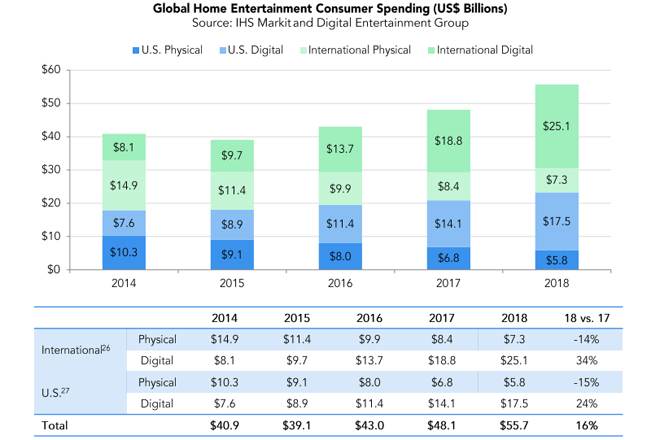 But while physical media sales might be on the decline, the overall home entertainment industry is actually growing -- thanks in large part to the increased popularity of digital media and streaming services. Per the MPAA report, global digital media spending has gone up by 170% over the last five years, rising from $15.7 billion in 2014 to $42.6 billion in 2018. In addition, 2018 marked the first year that subscriptions to online services surpassed subscriptions to cable. With that said, despite having fewer members, cable still accounted for a higher overall revenue total than streaming platforms did in 2018.

Of course, many home theater enthusiasts (like myself) continue to greatly appreciate the video and audio quality benefits of physical media like 4K Ultra HD Blu-ray over digital streaming. It's just not clear whether that passionate yet relatively niche consumer base will be enough to ensure the survival of disc-based formats going forward.

Sources: MPAA via The Digital Bits