In preparation for Halloween, 20th Century Fox and MGM have announced plans to re-release 19 horror flicks on Blu-ray with new limited edition art packaging by renowned artist/illustrator Orlando Arocena. The lineup will be available through major retailers nationwide for a limited time while supplies last starting September 12.

In addition, customers who purchase the discs at Walmart beginning September 19 will also be able to receive an exclusive coloring book featuring all 19 designs. Artist Orlando Arocena is known for his contemporary street fusion style marked by vibrant colors and fervent imagination. Check out a preview of the cover art below! 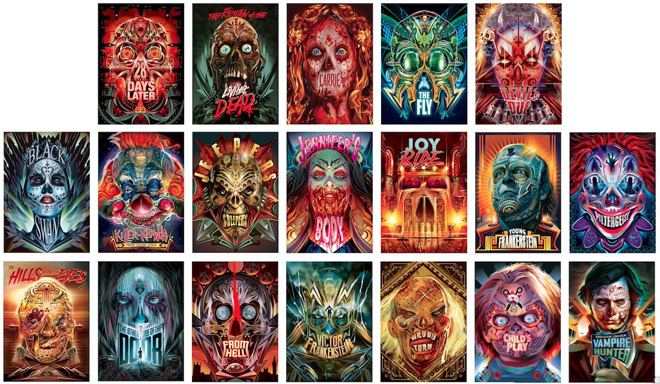 Choose your favorite Halloween hits, featuring Hollywood's biggest stars, and start planning a killer movie night that's sure to be a scream. It's an eye-popping, spine-tingling collection to die for!

The full Halloween Collection lineup will include:

- Johannes Roberts'The Other Side of the Door starring Sarah Wayne Callies, Jeremy Sisto, and Sofia Rosinsky

Specs and supplements have not been announced, but the discs are all expected to be reissues of each film's previous Blu-ray release simply repackaged with the new cover art by Orlando Arocena.