Pre-orders are up for Bryan Singer's mutant-filled blockbuster on all three formats at Amazon.

In an early announcement to retailers, 20th Century Fox will be releasing 'X-Men: Apocalypse' on Blu-ray, Blu-ray 3D, and 4K Ultra HD Blu-ray later this fall.

Worshiped as a god since the dawn of civilization, the immortal Apocalypse (Oscar Isaac) becomes the first and most powerful mutant. Awakening after thousands of years, he recruits the disheartened Magneto (Michael Fassbender) and other mutants to create a new world order. As the fate of the Earth hangs in the balance, Professor X (James McAvoy) and Raven (Jennifer Lawrence) lead a team of young X-Men to stop their seemingly invincible nemesis from destroying mankind.

You can find the latest specs for 'X-Men: Apocalypse' linked from our Blu-ray Release Schedule, where it is indexed under PENDING. 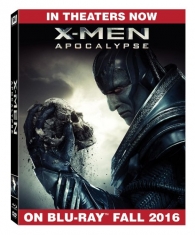