Supplements have been revealed for the sixth installment in the horror franchise arriving on Blu-ray in October. Pre-order here!

A sudden and mysterious inheritance brings Danny and his friends to Hobb Springs, a forgotten resort deep in the West Virginia hills. Hobb Springs is being looked after under the watchful care of Jackson and Sally, a socially and awkward couple who introduce Danny to the long lost family he's never known. Soon, Danny is forced to choose between his friends and his bloodline.

Specs have yet to be revealed, but supplements will include Inheritance, All The Kills In Them Hills, and Hobb Springs: A Place To Rest... In Peace.

You can find the latest specs for 'Wrong Turn 6: Last Resort' linked from our Blu-ray Release Schedule, where it's indexed under October 21. 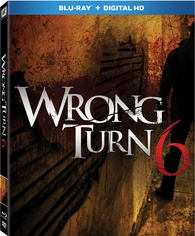