Mike Nichols' acclaimed 1988 rom-com is bound for Blu-ray in January. You can pre-order it  here.

In an early announcement to retailers, 20th Century Fox is set to bring 'Working Girl' to Blu-ray on January 6.

Nominated for 6 Academy Awards; director Mike Nichols' witty, romantic look at life in the corporate jungle stars Melanie Griffith as Tess McGill, an ambitious secretary with a unique approach for climbing the ladder to success. When her classy, but villainous boss (Sigourneey Weaver) Breaks a leg skiing, Tess simply takes over her office, her apartment, even her wardrobe. She then creates a deal with a handsome investment banker (Harrison Ford) that will either take her straight to the top - or finish her off for good.

The Blu-ray will feature 1080p video, a lossless 5.1 soundtrack, and supplements include trailers and TV spots.

You can find the latest specs for 'Working Girl' linked from our Blu-ray Release Schedule, where it is indexed under January 6. 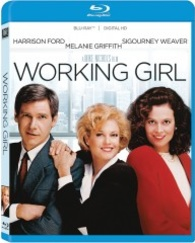