'Why Him?' Announced for Blu-ray and Ultra HD Blu-ray

The comedy starring Bryan Cranston and James Franco comes to both formats next month.

In an early announcement to retailers, 20th Century Fox says 'Why Him?' will be available on Blu-ray and Ultra HD Blu-ray on March 28.

Bryan Cranston and James Franco fight the ultimate battle of wits and wills in this outrageous, no-holds-barred comedy from filmmaker John Hamburg (I Love you Man, Along Came Polly, Meet the Parents, and Zoolander). Ned (Bryan Cranston), an overprotective but loving dad, and his family visit his daughter at college, where he meets his biggest nightmare: her well-meaning but socially awkward Silicon Valley billionaire boyfriend, Laird (James Franco). A rivalry develops, and Ned's panic level goes through the roof when he finds himself lost in this glamorous high-tech world and learns that Laird is about to pop the question.

You can find the latest specs for 'Why Him?' linked from our Blu-ray Release Schedule, where it is indexed under March 28. 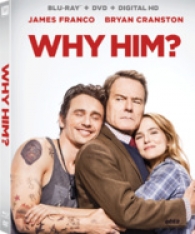 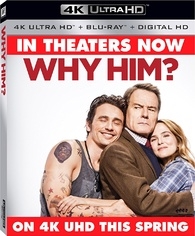