Who Wants Chimichangas?! 'Deadpool' Up For Pre-Order!

Ryan Reynolds puts on the anti-hero's tights and heads to Blu-ray later this year.

In an early announcement to retailers, 20th Century Fox says 'Deadpool' will be pummeling Blu-ray in the spring.

You can find the latest specs for 'Deadpool' linked from our Blu-ray Release Schedule, where it is indexed under PENDING. 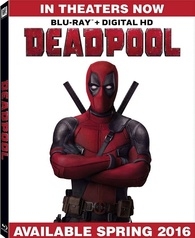