'The Woman in Black 2: Angel of Death' Blu-ray Supplements Detailed

The next chapter in the horror tale is bound for Blu-ray in April. Pre-order your copy here.

As previously reported, 20th Century Fox is set to release 'The Woman in Black 2: Angel of Death' on Blu-ray on April 14.

The supernatural terror returns and unspeakable evil sets its sight on new prey when a group of orphaned children are forced to move into the abandoned Eel Marsh House with their caretakers, Eve and Jean. As the children begin to mysteriously disappear, Eve makes a shocking discovery…it may not be a coincidence that she has come to reside in a place inhabited by the murderous Woman in Black.

You can find the latest specs for 'The Woman in Black 2: Angel of Death' linked from our Blu-ray Release Schedule, where it's indexed under April 14. 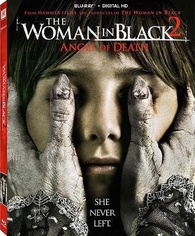