The Truth Is Out There: 'The X-Files: Event Series' Blu-ray Pre-Orders Live

The brand-new Season 10 of the acclaimed series is up for Blu-ray pre-orders at Amazon.

In an early announcement to retailers, 20th Century Fox is preparing 'The X-Files: Event Series' for Blu-ray later this year.

You can find the latest specs for 'The X-Files: Event Series' linked from our Blu-ray Release Schedule, where it's indexed under PENDING. 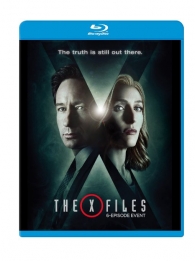