'The Strain: The Complete Second Season' Dated and Detailed for Blu-ray

The second season of the horror series arrives on Blu-ray in August.

In an early announcement to retailers, 20th Century Fox will be releasing 'The Strain: The Complete Second Season' on Blu-ray on August 23.

The mysterious epidemic transforming the citizens of New York into horrifying creatures continues to rage during the second terrifying season of this acclaimed horror series. While doctors Ephraim Goodweather (Corey Stoll) and Nora Martinez (Mia Maestro) race to create a biological weapon to destroy the creatures, Abraham Setrakian (David Bradley) relentlessly searches for an ancient book that may hold the key to defeating the sinister “Master.” Aware that he is now hunted by his handful of unlikely allies, the Master creates even more unstoppable bloodthirsty monsters in this darkly thrilling show that delivers nonstop chills from the first episode through the climactic season finale!

The Blu-ray will feature 1080p video, lossless 5.1 audio, and supplements include: Deleted Scenes; Meet the Crew of The Strain; The White Room; Audio Commentary on "Night Train" featuring Carlton Cuse; Gag Reel; Beyond the Page; and Sentient strigoi.

You can find the latest specs for 'The Strain: The Complete Second Season' linked from our Blu-ray Release Schedule, where it is indexed under August 23. 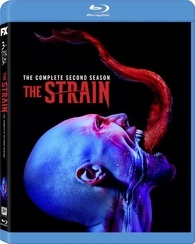