The Simpsons: The Seventeenth Season' Blu-ray Up for Pre-orders!

The 2005-2006 season unleashes an angry Sideshow Bob on Blu-ray in December. You can order it now!

In an early announcement to retailers, 20th Century Fox will be releasing 'The Simpsons: The Seventeenth Season' on Blu-ray on December 2.

When we were 17 it was a very good year -- a year for Homer's new dad, MacGyver gets mad, Sideshow Bob's not so bad... Another comical compilation of “The Simpsons” — the longest-running scripted show in television history — has arrived. Season 17 contains all 22 outrageous episodes, a vast repertoire of Springfieldian special features, plus a mind-blowing list of celebrity guest voices, including Alec Baldwin, Larry Hagman, William H. Macy, Frances McDormand, Rob Reiner, Susan Sarandon and Lily Tomlin, just to name a few, with additional guest voices also providing commentary including Richard Dean Anderson, Ricky Gervais, Michael York and Kelsey Grammer. Phew!

You can find the latest specs for 'The Simpsons: The Seventeenth Season' linked from our Blu-ray Release Schedule, where it is indexed under December 2. 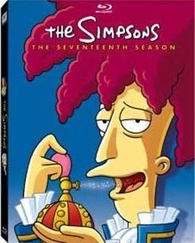