'The Other Side of the Door' Blu-ray Dated & Detailed

The supernatural thriller will be unleashed on Blu-ray in June

In an early announcement to retailers, 20th Century Fox is preparing 'The Other Side of the Door' for Blu-ray on June 7.

In this chilling supernatural story from cowriter-director Johannes Roberts, a family’s idyllic life abroad turns to tragedy — then terror. After her young son dies in an accident, a grieving mother (Sarah Wayne Callies) learns of a ritual that will bring him back for a final goodbye. When she travels to an ancient temple to undertake the ritual, she discovers a door that serves as a portal to the afterworld. But when she ignores a warning not to open the door, the balance between life and death is upset. Now, an unspeakable horror is unleashed that threatens the lives of everyone she loves. This unpredictable film starring Jeremy Sisto delivers edge-of-your-seat thrills from start to finish.

The Blu-ray will feature 1080p video, a DTS-HD MA 5.1 soundtrack, and supplements will include: Deleted Scenes; Behind the Door; and Gallery.

Suggested list price for the Blu-ray/DVD/Digital HD combo pack is $29.99.

You can find the latest specs for 'The Other Side of the Door' linked from our Blu-ray Release Schedule, where it's indexed under June 7. 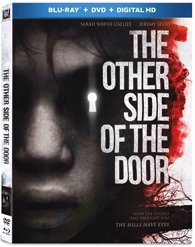 Discs mentioned in this article: (Click for specs and reviews)
The Other Side of the Door (Blu-ray)